Michael remembers feeling helpless the first time he saw images on the news of refugees in ramshackle boats washing ashore in Greece. 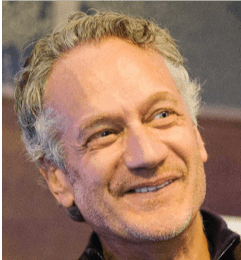 “I realized I didn’t really even know what was going on with the refugee crisis,” he said. “I was so frustrated because I wanted to learn more and help and do something.”

In 2016, he visited Amman to meet with several organizations that assist displaced persons. Though all the groups shared a similar mission, Michael was drawn to CRP because he felt a strong sense of community at the center in Hashemi Shamali. He also liked the nonprofit’s holistic approach to helping people heal.

“It wasn’t just about handing out food vouchers; There seemed to be a genuine desire to take care of the whole person,” he said.

After his trip ended, Michael decided to support CRP by donating and volunteering with the eLearning Skype language-exchange program, which allows advanced students to practice their foreign language skills with a native English speaker over Skype. Michael said volunteering as an English conversation partner was a rewarding experience, and he continues to stay in touch with several of his former students.

“The advanced students really want to learn because they know that they’re close and they just need extra practice,” he said. “Their only other option sometimes is watching television.”

Earlier this year, Michael took on a new role by joining CRP’s board. As a board member, he said he hopes CRP will continue growing so it can offer its services to more people in need.

Although Michael once felt helpless as he watched the news, he now realizes there are many ways to support those affected by the refugee crisis — and he urges others to step up and get involved.

“The refugee crisis receives less attention today because it’s been an ongoing problem for years,” he explains. “But that doesn’t make it any less urgent–it’s still a crisis. It’s still affecting millions of people. Yet in some countries, like in the US, it’s barely felt. That boggles my mind.”