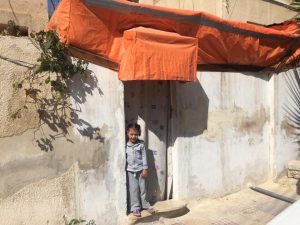 Today we visited a refugee family who knocked on CRP’s door asking for help. This family’s story is truly heartbreaking.

Abu Amjad and his family fled to Jordan from Iraq in June 2013 after targeted persecution in their home community. In October 2012, a neighbor reported Abu Amjad to a sectarian militia and accused him of working as an interpreter for American troops. In reality, he owned an institute to support deaf and mute individuals in Iraq. Based on his neighbor’s accusation, his 24-years-old son, Amjad, was kidnapped and killed three days later as a warning message to the family to leave Iraq.

After this tragic incident, the family moved to another province. However, almost 3 months later, the same militia attacked their new house with gunfire and hand grenades. Believing his wife to be the only survivor, the militia abducted and tortured her for six days until she promised to leave Iraq. As a result, she developed spinal damage and now needs to use a wheelchair. Luckily, Abu Amjad and his daughter survived the attack and were taken to a hospital by their neighbors. However, due to the acoustic trauma caused by the grenades, Abu Amjad is now deaf in one ear and needs a hearing aid for his other ear.

While in Jordan, the family had been relying on the generosity of their neighbors for food and basic necessities. Occasionally, Abu Amjad is able to find work as a house-cleaner, allowing him to pay rent ($100 a month) for their one bedroom apartment. Now, CRP has been able to help this amazing family by providing them with monthly food vouchers. This emergency assistance has been crucial, as their daughter is severely malnourished. In addition, they now have access to the medications their daughter needs to treat the severe bronchitis. Until now, her parents had not been able to afford her medication.

Thank you to everyone for your continued support! The aid Abu Amjad’s family has received would not be possible without you!