Yoga is a core component of CRP’s psychosocial programming, but before 2014, the only yoga CRP had offered was a two-week class in 2012. Bella Hancock, who has been the main force behind the development of CRP’s current yoga program, recently returned to Amman for a five-week stay and reflected on the program’s creation and expansion.

In 2014, Hancock organized a fundraising event in her village in Ireland in order to raise money for Syrian refugees. A woman involved in the fundraiser knew about CRP and suggested that they send the funds they had raised to support CRP’s programming. After researching the organization, Hancock decided to come to Amman to volunteer for five weeks as a yoga teacher. When she arrived at CRP, she set up classes for men, women, kids, and teens. Hancock found that a number of her students were interested in learning more than just the basics, and she began offering a class twice a week on the philosophies and basic principles of yoga. 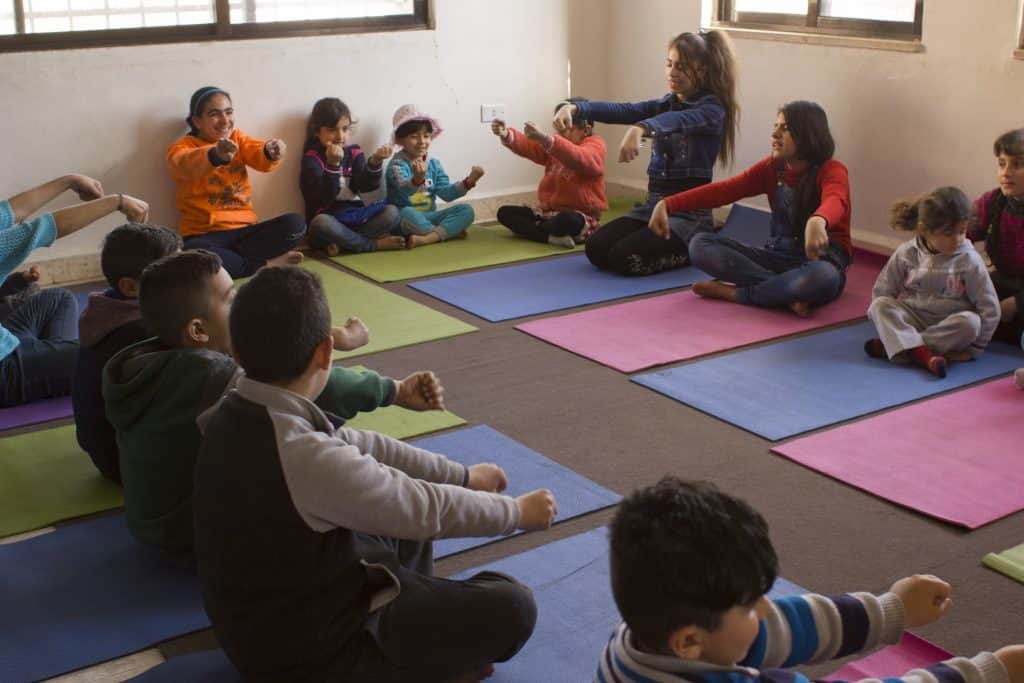 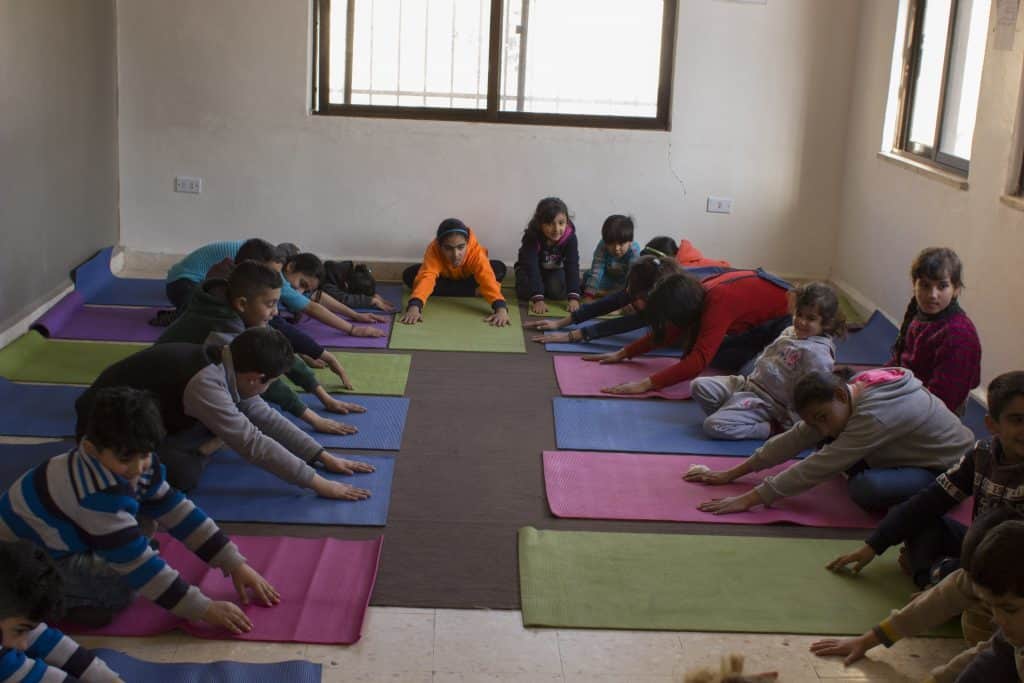 “Some of these people then were interested to go further and possibly train to teach yoga,” Hancock said. Hancock returned to Ireland to consult with another yoga teacher, Claire Osborne, about developing a teacher training program. When she came back to Amman, she began to work closely with a group of about ten people on a daily basis. “They all got a lot from it, and some of them continued, like Nadia, who teaches here; she then continued and got accepted into a Yoga Alliance training and is now a fully qualified teacher. But we realized it wasn’t very realistic to expect complete beginners to become teachers in such a short period of time, but it gave people a very good foundation.”

In 2016, Hancock and Osborne led a training for certified yoga teachers in Amman. Hancock explained that there were many teachers who were willing to volunteer at CRP, but they taught different types of yoga, meaning there was no consistency for the students. “The needs of the refugee community are quite specific and there’s a lot of specific help conditions that are related to PTSD, for example, like high blood pressure, diabetes, back problems, anxiety, depression, insomnia, these kinds of things. So we felt the yoga really needed as much as possible to address this and to also be aware of how trauma affects people physically and emotionally and mentally, and so we can teach in a way that is informed about that and can support people and not trigger their trauma.” The teacher training was successful, with about 18 participants, most of whom subsequently volunteered at CRP. 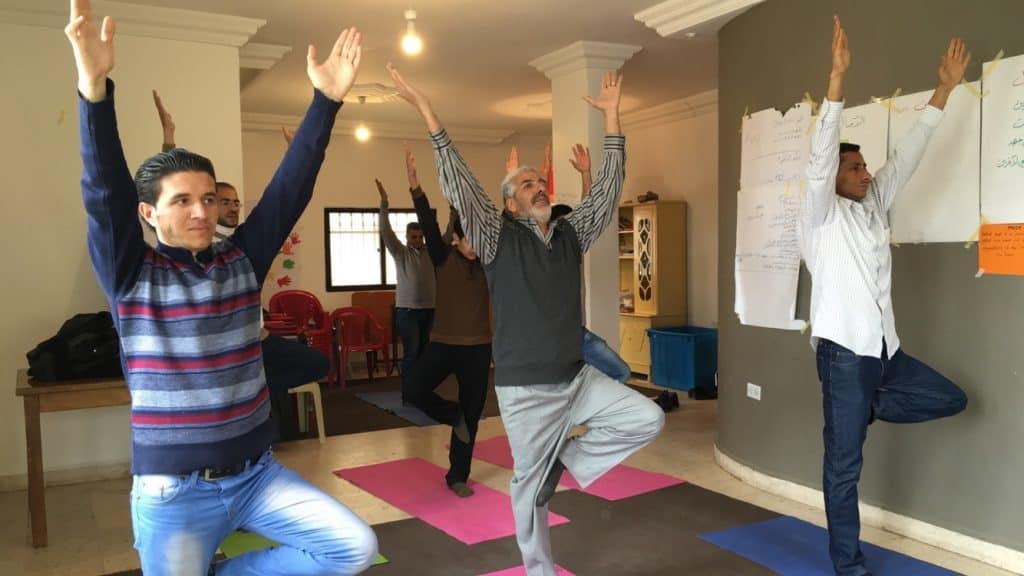 “We’ve found people so receptive to yoga. Right from the start, people would turn up, and interestingly for me, the men’s classes are more attended than the women’s,” Hancock said. “Maybe it has to do with the inactivity of their lives, of being a refugee; you’re very stuck physically, it’s hard to get exercise and movement. One of the questions we get asked by the men more often than the women is, ‘Will this help my head? Will this sort my head out?’ Some of the guys say, ‘Yeah, I’m really stressed, or ‘my head’s a mess’, or ‘I can’t sleep.’ I think they recognize that they’re really in need of something, and they seem to really love the meditation side of it, the relaxation, the breathing.’”

Hancock grew up with yoga; her stepmother was a yoga teacher. She started teaching yoga in the early 2000s. She had been feeling unfulfilled at work, and when she read a flyer for a yoga teacher training, she decided to try it. “I didn’t at the time know where it would take me, or if I would teach, but I seemed to fall into teaching very naturally and it felt very comfortable for me.”

Hancock believes that yoga has made a positive difference in her life. “It’s taught me to 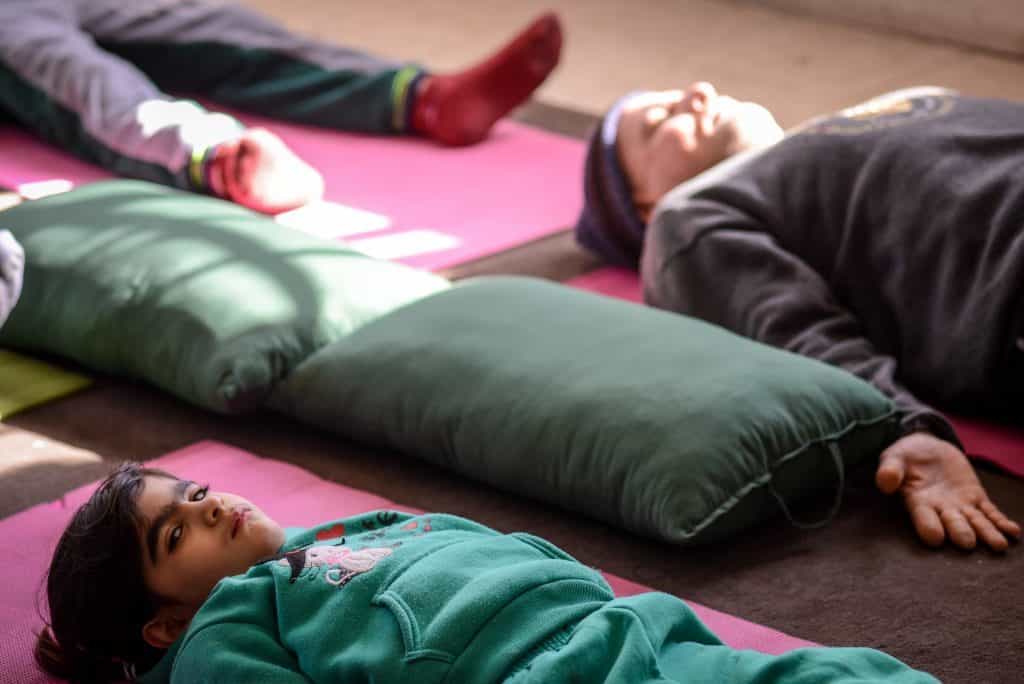 slow down, it’s taught me to rest, it’s taught me to value myself more,” she says. “For the refugee population, I think it’s helpful on several levels. I think the physical practice is great, moving the body, getting stronger, feeling stronger. You feel stronger and more resilient in your mental self and your emotional self.”

Hancock’s classes started up again at CRP this past week and have been well attended. She taught a class at After School Club on Tuesday, where the children excitedly shared with her that they had previously learned sun salutations and the butterfly pose. “I like it,” one girl said. “It feels good.” While she is here, Hancock is also volunteering at the Zaatari Refugee Camp.

The Relationship Between Art and Peace