No food, no school, no ordinary life. Young Emad and his family were forced to flee Syria in the wake of bombings and destruction. Since coming to Amman, life has not been easy either.

Emad has been in school since he arrived here a couple years ago but has faced immense difficulty settling in. He has been bullied and treated unfairly while in school. Fellow students don’t understand his situation, so making school friends is hard. He has struggled with fear because many things trigger his trauma. For Emad, the color red creates emotions of fear and flashbacks of the Syrian war. This is all common experience for refugees.

Not only do refugees face recurring trauma, but they also have to maintain their finances. Amman is an expensive place to live and send children to school. Most refugees cannot legally work. Emad lives with his family at his grandmother’s house, and she also has a couple young children in school. Their school transportation costs 35 JD ($49) per month for all of the children, because the kids were assigned a school far from their home. Buying winter clothing can also be a burden on families with growing kids. Emad’s mother, Khaleeda, mentions, “We worry what we will do in the next week or month if we do not receive money.”

CRP has alleviated some of the family’s school costs. Emad and the other children in his family were given school supplies and uniforms at CRP’s back-to-school distribution last August. This was great for Emad because he loves school. It helped his family to save what little they had to pay for clothes and shoes for the school year. Khaleeda says, “Emad is a great student. He has straight A’s!”

Though making friends at school is still difficult, Emad has found a small community of boys that love him and welcome him at CRP. “I love playing with my new friends,” he says. His favorite activities at CRP are painting, coloring, and learning. He says, “If I find someone I want to be my friend, I will help him.” Everyone can see his kindness towards his friends at the After School Club. Emad and his friend worked together to make a protection basket for an egg drop contest.

Emad wants to be a pilot and Khaleeda wants nothing more than for Emad to be educated, no matter where they live. “The education that Emad receives in Amman is good,” Khaleeda says. “I wanted to be a pilot and that is an idea that Emad likes. All I’m concerned about is him going to school, and then becoming something that will benefit society and our lives. That’s the way that his dreams will come true and my dreams for him will come true.”

We need your help to keep kids in school and provide a safe place for them to learn and grow. Donate here! 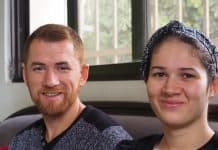