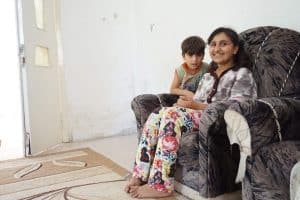 The families in our community represent a diversity of experience. By going on regular home visits, we have the opportunity to learn about their lives, their needs, and the challenges they have faced, both in their home countries and as urban refugees in Jordan. Below are three families we have recently added to our monthly food voucher program after visiting them in their homes:

Lamia and her son Qais are recent arrivals in Amman. In Iraq, Qais worked with the American army, but when his friend was killed, he and Lamia decided that it was too dangerous to stay in the country. Lamia and Qais have no source of income, and CRP has provided them with mattresses, blankets, and pillows for their home.

Sami, Aseel and their two sons, Thamer (8) and Ghaith (6), are from Homs, Syria. Having fled the violence in Syria, they now live in a small, poorly-lit basement apartment without a bathroom. Syrian refugees cannot legally work in Jordan, and Sami has heart problems that prevent him from seeking work in the informal sector. As a result, the family has no source of income and is two months behind on their rent. They also do not receive food assistance through the UN’s World Food Programme. Most other Syrian refugee families living outside of camps will lose food assistance in August due to funding shortfalls. Though many refugee families have been unable to send their children to school because of the associated costs of uniforms and textbooks, Thamer attends a public school and enjoys reading. Despite this, he has struggled to make friends with his classmates.

We also visited Sabah and Sahar and their children Nesreen (10), Basem (9), and Amjed (5). The family arrived in Amman too late in the year to register the children for school this past year, but the children will be beginning classes in the fall. The heat of the summer months has been hard on the family as their apartment has no air-conditioning and they have own only one fan. Because of this, the five members of the family eat and sleep in the same room.

We look forward to getting to know theses families better in the coming months and welcoming them to our community center activities.