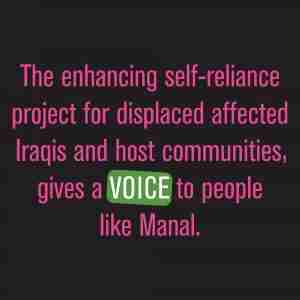 As part of the Heart of Amman initiative to enhance self-reliance, CRP, in partnership with UNDP Jordan and funded by the Italian Agency for Development Cooperation in Jordan, conducted a Community Dialogue and Needs Survey.

The Survey asked a diverse range of questions about the lives of those who participated, from basic facts such as age, gender, and nationality, to more in-depth questions about income and employment status. Participants were also asked about their living situation and neighborhood to determine what they were happy with and what they perhaps lacked.

In recent years, we at CRP have been striving towards an increasingly modern and progressive understanding of the role of an NGO and how it ought to function. We have come to prioritize dialogue as a key-value and foundational principle. We aim to make it the starting point for all decision-making and positive change within our community. To put it simply, we believe that asking those in the communities we serve what they genuinely need to develop and progress should be the first step in structuring the programs and services that need to be provided.

After conducting 238 surveys in Al-Yarmouk, Al-Madina, Jabal Amman, and Weibdeh, our team started to build up a picture of the sort of beneficiary we are here to help. This has nothing to do with creating or perpetuating stereotypes; instead, it is a way to understand statistics, putting a face to what can be an overwhelming amount of data.

Manal doesn’t exist as such, but in another sense, she is a model that represents how life is for the majority of Iraqi beneficiaries. She is 45, and the head of her household, and a refugee. She has many worries, and money is, of course, the main priority. As a refugee, it is illegal for her to work in Jordan, and even if she could, the lack of formal education and skills is a challenge she faces every day. Manal does not receive any aid and has no regular source of income, so she is facing the threat of eviction from her rented apartment. This eviction will affect not only her but also her children. Hashem (10), and Kama (15), are stuck at home due to the pandemic, trying their best to keep making progress in their school classes via distance learning. Manal worries about them too-there isn’t anywhere safe for them to play near her apartment, and they don’t participate in any activities with local community centers or NGOs.

Her eldest son, Adnan (19), did not pass his high school diploma last year and cannot find any work. Instead of being a source of support to Manal, his inability to work makes him a financial strain on the household. The fact that Adnan was able to attend high school at all was an achievement for the family. With only 50% of refugee children in primary school and 25% in high school worldwide, according to a recent report by UNESCO, Adnan was already fighting against the odds.

Despite all of this, Manal is trying hard to improve her situation. In the past, she has participated in psychological support sessions to try to improve her mindset. These sessions helped, and she is willing to give them a go again. She even tells us she would like to volunteer in her community.

So, we’ve been able to put a face to a statistic. Now what? We don’t know what the future holds for families like Manal’s, but we know that, through dialogue and the needs-specific programming it makes possible, we can improve their present and set them on a path towards a better future.

The enhancing self-reliance project for displaced affected Iraqis and host communities gives a voice to people like Manal. As a community, we can find solutions to the many challenges Iraqis and impoverished Jordanian families face.