In the words of former UN Secretary Gender Kofi Annan, ‘[Sport’s] values are universal. It is a global language, capable of bridging social, cultural, and religious divides.’ This belief, that sport contributes to personal development and growth, and above all creates pluralistic bonds of unity, is something that Iraqi refugee and Taekwondo black belt Majed knows well.

Having won his 4th Degree ‘Yon-Dan’ Black Belt, in Iraq, which designates Majed a ‘Sensei’ or qualified teacher in his discipline, Majed found himself one of the many ethnic Arabs recently subject to diaspora. Finding a home in Amman like so many other displaced Iraqis, Majed became a member of the CRP community, integrating himself into the Northern Hashmi area. In a recent interview he recalls his initial association with the project, where he took courses in hairdressing, music, Arabic calligraphy, and sculpture.

Inspired by the sense of resilient community he found at the organization, Majed saw an opportunity to lend some of his own specialized skills to a vibrant and undulating society of culturally varied but like-minded people.  ‘I submitted my request as a volunteer to give Taekwondo courses… And indeed, my request was approved and it was my great joy to be a volunteer with this wonderful association.’

Majed began running his self-defense classes in early 2020. ‘We coordinated two classes for both genders within the association’, he elaborates, ‘and won the admiration of everyone.’ He describes the inevitable difficulties that arose not only organization-wide but globally during 2020 which forced him to switch to ‘giving online courses via Facebook on CRP’s page( همتنا بلمتنا). The live broadcasts were two sessions a week… and it was a wonderful new experience for me.’

Majed relied on his accumulated training and experience teaching the sport to facilitate enriching classes for people from an array of backgrounds, including Syrian, Yemeni, Sudanese, and fellow Iraqis.

As well as allowing Majed himself to reclaim agency within his chosen discipline and, as he puts it, ‘volunteer in the field of human rights’ with CRP, the benefits these classes had and are continuing to have for attendees are manifold. The locus of many CRP activities revolve around trauma alleviation and psychological healing, betraying the oft tumultuous circumstances many of CRP’s beneficiaries hail from. Part of the healing process of successful community development within these relocated communities is addressing these mental health issues before they manifest in destructive ways.

According to this UN report, crime prevention in refugee communities, including the prevention of violent extremism, requires the promotion of social cohesion. Sport can play a unique role in that respect by generating social capital and helping to mobilize communities, and promote social inclusion and solidarity. CRP works always to educate and upskill its refugee members into a thriving multicultural community, and this often involves overcoming significant language and cultural barriers. The fostering of connection through sport and the teamwork it engenders is, as Majed has found, incredibly good at building bridges between persons who may not otherwise have had much common ground. 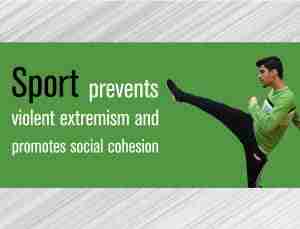 The report’s sport-based theory of change through integration identifies five key zones through which sport can support refugee rehabilitation: the creation of safe spaces, social inclusion, education, resilience, and empowerment.

It’s been easy to see these five key areas manifest on behalf of the participants in Majed’s program. The self-actualization that comes with learning and new skill is combined with physical fitness, a sense of belonging, social ties, and particularly for female participants, a sense of physical empowerment often denied to women in societies across cultures.

Like all of us, Majed is awaiting the end of the pandemic to resume teaching classes in person. However, as it stands, he is finding online teaching ‘a new challenge that added to my confidence and strength.’ Here’s to hoping that, in the future, we might find even more black belt holders scattered around Amman to add to Majed’s unfolding legacy.