At the end of Ramadan, our Empowering Female Leaders program started up again in full force. This multi-component project is supported by Dining for Women (DFW), a US-based non-profit giving circle. The programming focuses on health and wellness, psychosocial support, and leadership skills for women in our community.

The programming began with a training on dental hygiene, given by dentist Shirene Rahil. The tips the women learned dealt with the causes of tooth decay and how to maintain proper dental hygiene. The information they learned will help them keep their and their families’ teeth healthy. 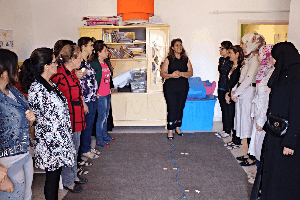 The next three weekly trainings focused on human rights, and were led by Nuha Muhreiz, a Jordanian human rights specialist. In the first week, the women learned about and discussed the Universal Declaration of Human Rights (UDHR), which was first adopted in 1948 and is the basis of international human rights law. The UDHR outlines the rights that people are inherently guaranteed simply by being human–regardless of religion, gender, race, or nationality. The next training delved into the Convention on the Elimination of All Forms of Discrimination Against Women (CEDAW), an international United Nations treaty, which went into effect in 1981. The treaty outlines the rights of women and places obligations on countries to take action to address gender-based discrimination and promote gender equality. Jordan ratified CEDAW in 1992. The most recent training centered on the international rights of refugees, and the United Nation’s 1951 Refugee Convention, which has recently been cast into the national spotlight due to the refugee crisis in The Middle East and Europe .

All of the trainings have been interactive, encouraging the women to discuss their experiences, their views on crucial issues discussed, and how these situations have and could affect them. Understanding their rights will make the women better qualified to advocate on behalf of themselves and their families.
In addition to the weekly trainings, the women attend yoga classes twice per week, which are led by one of the women in our community. The yoga classes offer the women a chance for exercise and for relaxation. Finally, an interactive movement and dance class has recently been added to the schedule, which allows the women to have fun and interact with each other and the music. This activity will be coupled with Traumatic Release Exercises (TRE).