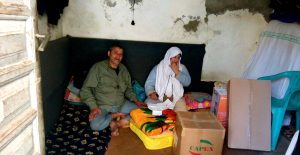 Maher, 64, and his wife Areej, 40, left Syria and arrived in Jordan in early 2013, but only recently were put in touch with CRP. Both Maher and Areej are suffering from health problems directly related to the conflict in Syria. As a result of a bomb blast, Maher has lost hearing in one of his ears. Areej has limited mobility due residual shrapnel from a bombing and rarely is able to leave their one-room apartment.

To make ends meet, Maher and Areej have resorted to collecting and reselling garbage found in the streets of Amman. Despite such challenges, Maher and Areej both greeted CRP staff with smiles on their faces, welcoming us into their home. They are now on our food voucher program and have been given fuel, rugs, a heater, and other basic necessities. In addition, CRP is providing Areej with a wheelchair, which will ease the pain and stress in her legs.

We are eager to welcome Areej and Maher into the CRP community and assist them in any way possible.