CRP is very sad to be saying goodbye to one of our long-term interns and volunteers, Salem. Salem has dedicated close to 2 years to CRP, working as the Volunteer Coordinator, with the TEFL team, the Youth team, and the Communications team. He was an all-rounder who always did whatever needed to be done for CRP, and a skilled translator! We’ll miss him so much, but wish him all the best in the future, wherever it takes him.

We asked some of Salem’s colleagues at CRP about him, and their favourite memory of Salem! 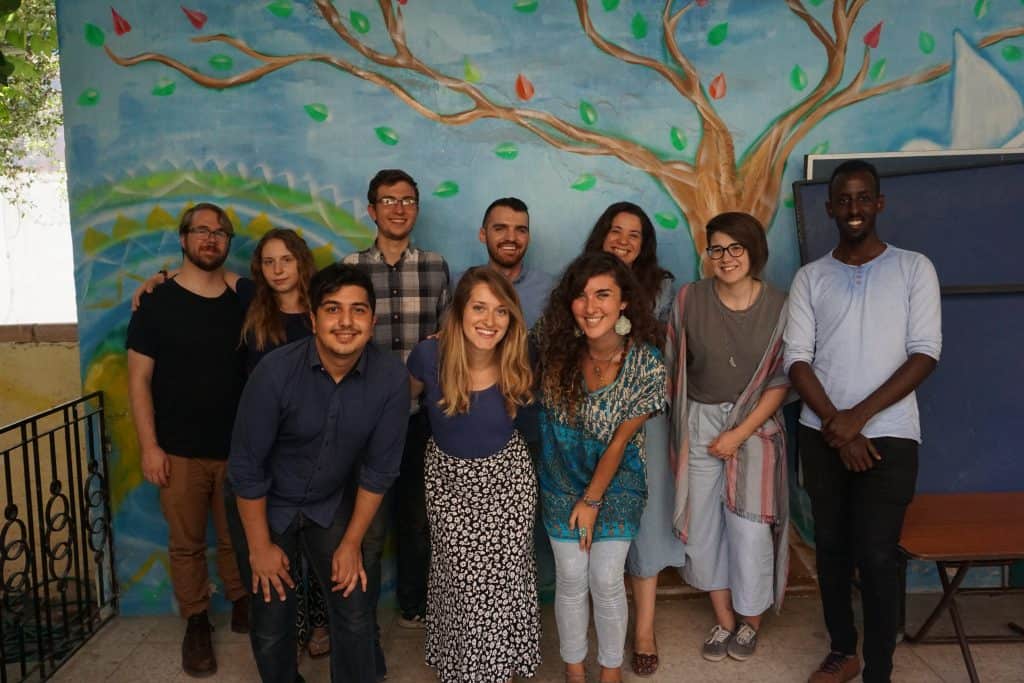 “I was his first ever supervisor – he started as an English teacher, then started getting really involved with the English program. Then became the Volunteer Coordinator intern.

He had such great energy, he was always great at English (he says he learnt from TV!), good at working with all kinds of volunteers and supporting them and making them feel heard. He was good at recruiting volunteers, too! He basically did whatever was needed to be done for CRP – he translated materials for the Supergirls program, he got involved with the Youth Programs, he led Zumba classes… Those classes were really special. All the kids were so happy to be there, and Salem was so in his element – his positivity was infectious. Honestly, when you think about it, it’s crazy for someone to volunteer for almost 2 years – he really gave everything to CRP!

My favourite memory of Salem… So this is just one of many. We had a big donor come to visit, and everyone was crazy busy, including Salem and I. The donors absolutely fell in love with Salem, and invited him out for meals! Salem is like that – he throws himself into any new challenge, and everyone loves him!

When you think about his story – it’s really amazing. He came to Jordan when he was just 15, completely alone, and made a life for himself here. He’s an incredibly smart and hardworking individual.”

Salem started off teaching the kids English and quickly became very important to everyone at CRP because he did so much – he helped the Youth Team a lot, especially when he was teaching zumba! The kids are still asking if he will come back!

He was really great with the volunteers too, and with visitor tours – he was always so friendly and good at explaining what was happening at CRP.

He always had such a lovely smile, a baby face, and his heart was wonderful – when you found out his age, you’d always think ‘wow!’ because he is so much more mature than his years. He was always able to do everything, despite being very young. He was many beautiful things! My favourite memory with him was when we were smoking nargheele (shisha) with another volunteer, and every lunchtime when we’d talk about the food together.

I feel like I lost a piece of myself! I miss him so much! Salem did everything in CRP, but the most amazing thing he did was the zumba class. The kids are still asking when he’s coming back to give them the class again.

Salem helped me so much in everything – he translated the Supergirls plans, so our Arabic volunteers could understand and the program ran so much more smoothly afterwards. He would help me with anything I asked – writing emails, computer things I didn’t know how to do, and he was always there when I needed him. He never said no, and even when he was busy he made time to help me.

My favourite memory… Whenever Salem gave visitors tours, he would introduce me as his best friend. And the zumba class! I used to dance in the class too, it was so fun. Also when we did [a staff member’s] birthday and we didn’t have a cake, so we just used bread and a candle… And when he’d play with my children, and when he’d talk about how he cooked in his home… Oh it’s too hard to choose one! Write that I miss him so much and want him to come back!”

“Salem has one of those personalities that allowed him to get along with everyone – he’s super outgoing and friendly. And always very kind to everybody. I actually met him a couple of years ago, when I was studying here in Amman. We became good friends, and he introduced me to all of his friends and showed me around Amman. Before I started at CRP, he invited me out to meet some of my soon-to-be co-workers, so that on my first day, I’d already know some people! He was always so kind and thoughtful like that. He will be missed.

“Salem is a very kind and positive human being. He always made everyone around him feel welcome. He’s missed because he brought a lot of love and light into every space he walked into. But we’re all so proud of him and want him to enjoy the new adventure that awaits him.

He always made me feel like if I needed anything in Jordan as a foreigner, he would be there to help. He also cares deeply about CRP and this very much showed in the way he approached the stories he would sometimes write for the Communications team.

As the Volunteer Coordinator, Salem basically wrangled with chaos every single day. It was definitely no small feat – it can be an ungrateful position at times. He also did translation work for us. I always forgot how young he was because he is so incredibly talented and wise beyond his years.

I don’t have a moment in time that I think of when I look back, more like a feeling. I love Salem’s quirks like the fact that he does not know the difference between a full stop and a comma. I loved that he knew where to get all the best food in Hashemi Shamali and how we would go to the bakery together to get mid-morning snacks. But above all, I remember how well integrated he was because he had gotten to see CRP evolve over the past 2 years and was a part of its growth. I hope that his time in Jordan has prepared him for the next steps of his life and I look forward to catching up over delicious pastries somewhere new, perhaps where neither of us have been to just yet.”