The UN estimates that over half of Syrian refugee children are not enrolled in school. Thousands of Iraqi children also stay home every day. Many of the families in our community have more than one child not attending school due to the cost, which adds up to around $100 for the year.

Recently, a family of 11 arrived from Iraq, fleeing due to violence and sectarian threats. Two of the sisters, five and seven years old, were afraid to go to school because of their experience in Iraq. CRP Programs Director Abu Yousef explained to them that they do not need to worry about things here in Jordan, and they immediately became enthusiastic about attending school. Their cousins felt similarly. Samer, just ten years old, said “I want to go to school because I miss my friends and want to make new friends.” 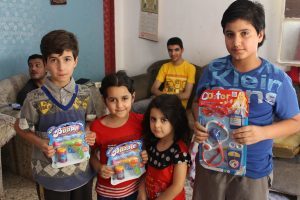 These children’s futures are put in jeopardy the longer they remain out of school. Many refugee children are out of school for many years, further complicating their situation. The trauma they have experienced makes them vulnerable to predatory work conditions and dangerous coping behaviors.

Another new family we have recently visited is from Basra in southern Iraq, and the two teenage sons are hoping to attend school in the fall. Their father has serious health conditions, and requires a surgery that costs over $30,000. The family cannot afford to send their children to school as it would mean taking money away from the funds that could be used for medical bills.

Education is a human right; it has the power to improve an entire community and lead to a better world. Only $100 sends a child to school for an entire year. Your $100 will give a child the gift of education and a brighter future.