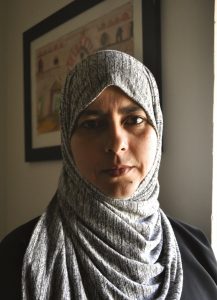 The Hope Workshop at Collateral Repair Project (CRP) is a women’s craft cooperative that brings refugee women together to design and market hand-made crafts in local bazaars throughout Amman. Most of the women are refugees from Iraq and Syria and their embroidery often weave together their old and new experiences. Over the summer, we collaborated with the Advocacy Project to have the women create beautiful embroidered squares that depict their lives, which were then put together to produce quilts for sale and exhibition in the United States. Over the next few weeks, we will be featuring other women who were a part of the summer workshop. Below Soltana, a member from our summer cooperative, shares her story.

Soltana’s roots are from Yaffa and Gaza. Her family came to Jordan after the 1967 War, but she says that now in Gaza, people are trapped and don’t have the opportunity to flee from danger.

As a Palestinian refugee living in Amman, she learned about CRP through neighbors and decided to get involved to meet new people and make friendships with Iraqis and Syrians. “They’ve experienced the same misery as the Palestinians,” she says. After learning about the Hope Workshop, she thought it would be a good way to build new friendships while learning new skills. Since joining, “I have become more outgoing and confident, and I can express my feelings better,” she says. Before she was shy, but now she’s loving meeting new people at Hope Workshop meetings. 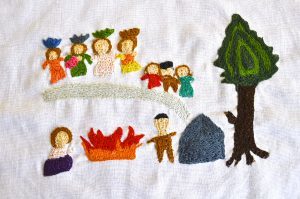 Her first picture shows people fleeing from the war in Gaza, leaving their homes for tents in the desert, the women carrying belongings with them on their heads. Her second image also shows people fleeing Gaza, but by sea. Some people, she explains, have drowned trying to escape. Others, such as the man she stitched in a wheelchair, are unable to leave and have to remain in danger. 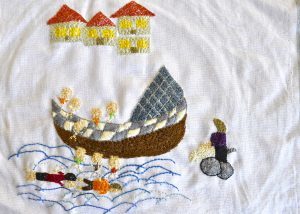 Through the Hope Workshop, Soltana has been able to share her story and hear the stories of her new friends from Syria and Iraq. Hearing from people with similar experiences fortifies her, she says, and the friendships she’s created across cultures give her hope for the future.

The Hope Workshop continues at CRP. With the holiday season right around the corner, our members are busy making hats and decorations to sell in local markets around Amman. This will help them generate a small income for themselves and their families.