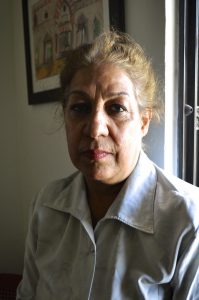 The Hope Workshop at Collateral Repair Project (CRP) is a women’s craft cooperative that brings refugee women together to design and market hand-made crafts in local bazaars throughout Amman. Most of the women are refugees from Iraq and Syria and their embroidery often weave together their old and new experiences. Over the summer, we collaborated with the Advocacy Project to have the women create beautiful embroidered squares that depict their lives, which were then put together to produce quilts for sale and exhibition in the United States. Over the next few weeks, we will be featuring other women who were a part of the summer workshop. This month, CRP restarted the Hope Workshop. Below Roa’a, a member from our summer cooperative, shares her story.

Originally from Baghdad, Wa’ad arrived in Jordan on January 1, 2015, two days after her birthday. Her friends connected her with CRP, and after meeting Shatha, the coordinator of the Hope Workshop, she decided to join to learn new skills. As a member, Wa’ad says that she remembers hopes that she had forgotten for a long time. From the very beginning of her involvement, she has made many friends and feels empowered being a part of the group. 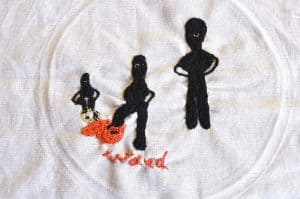 Wa’ad’s designs represent strong memories of hers from her time in Iraq. Her first image depicts an “accident” that happened to her in her home. She lived alone in Baghdad, she explains, and one night militiamen entered her home and beat her. They wore all black, an she could only see their eyes. It was this incident that caused her to leave her home for good and travel, alone, to Jordan to start a new life in Amman. 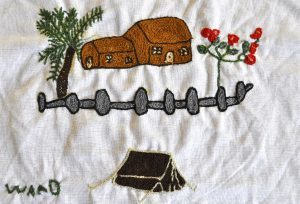 Her second picture shows the home she left behind. In Baghdad Wa’ad had a large house with a beautiful garden. She owned this home and was very proud to live there. Cutting across this image is a fence, which she says represents the border between Iraq in Jordan. On the other side, she has stitched a tent to symbolize her temporary home that she rents in Amman. The picture is a comparison between her past and current life.

Despite these difficulties, Wa’ad has hope for the future. She enjoys life moment to moment, she says, and many of her happy memories and experiences in Jordan come from the friendships she’s made in the Hope Workshop and at CRP.