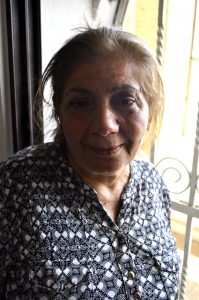 The Hope Workshop at Collateral Repair Project (CRP) is a women’s craft cooperative that brings refugee women together to design and market hand-made crafts in local bazaars throughout Amman. Most of the women are refugees from Iraq and Syria and their embroidery often weave together their old and new experiences. Over the summer, we collaborated with the Advocacy Project to have the women create beautiful embroidered squares that depict their lives, which were then put together to produce quilts for sale and exhibition in the United States. Over the next few weeks, we will be featuring other women who were a part of the summer workshop. Below Fakhriaya, a member from our summer cooperative, shares her story.

Fakhriaya arrived in Jordan in February 2015 along with her daughter, Aftab. One day while walking down the street in her new neighborhood, her daughter Aftab overhead a conversation between Hope Workshop coordinator, Shatha and a group of women outside the CRP community center. Aftab knew she was interested, and thought her mother would be as well. She brought Fakhriaya along with her to a Hope Workshop meeting and they’ve both been members ever since.

“I love embroidery,” Fakhriaya says. She used to make embroidered dresses for her daughter when they both lived in Baghdad. “It feels good to pick up old hobbies in a new place,” she says, saying that developing her embroidery skills is a step towards improving herself. When she and Aftab arrived in Jordan, their situation was really bad, she stresses. But now, with the skills she’s learned through the Hope Workshop, Fakhriaya feels like she can better depend on herself and support her daughter. “During the war in Iraq, there was no milk, no bread, our beds were on the floor,” she says. But now, the handicraft projects she’s participated in have showed her that, “I can create something from nothing.” 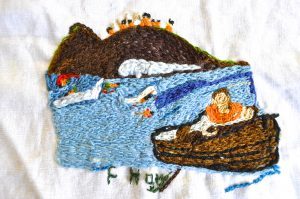 Fakhriaya’s first design is an image becoming increasingly familiar to anyone with a television. The square shows refugees fleeing by boat, attempting to get to Turkey by sea. Fakhriaya said she was convinced upon arriving in Jordan that she wanted to find a smuggler to take her and her daughter to Turkey. Then, she began seeing on the news frightening stories of failed crossing attempts, and read about the high incidences of drowning and crime along the route. These stories had an impact on her, and ultimately influenced her to remain in Jordan and start a new life in Amman. 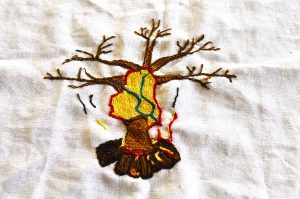 Her second image depicts in abstract form the flight of Sabians, a small Christian sect, out of Iraq. The roots represent her religion, which grew and flourished in Iraq. However, each branch she says represents a different destination to where Sabians are fleeing. “Jordan, the United States, Australia,” she says. Whole families, she explains, leave for one country, then branch out and become further separated. The small twigs at the end of each branch represent this separation. Meanwhile, Iraq itself, is emptying, she says, and fewer and fewer Sabians can be found there.

Being in Jordan gives Fakhriaya hope. “Here, we live in peace,” she says. She’s no longer afraid for her life or the life of her daughter.