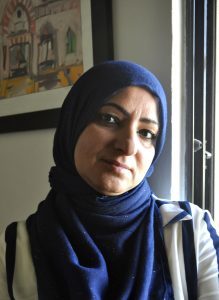 The Hope Workshop at Collateral Repair Project (CRP) is a women’s craft cooperative that brings refugee women together to design and market hand-made crafts in local bazaars throughout Amman. Most of the women are refugees from Iraq and Syria and their embroidery often weave together their old and new experiences. Over the summer, we collaborated with the Advocacy Project to have the women create beautiful embroidered squares that depict their lives, which were then put together to produce quilts for sale and exhibition in the United States. Over the next few weeks, we will be featuring other women who were a part of the summer workshop. Below Ikhlas, a member from our summer cooperative, shares her story.

Ikhlas came from Ramadi, Iraq, in Anbar province, to Jordan alone. Militants had entered her town and killed her cousin, she explains. After the initial attack, she and her neighbors were rounded up and brought to a large building. From there, she and her sister managed to escape and run away. They were picked up by a kind stranger in a van, who brought them to the desert, and then they were able to make their way to Baghdad. Ikhlas had been keeping her passport safe at a friend’s house in the city, so once she arrived, she collected it and made arrangements to leave Iraq. Her sister, however, was too afraid to travel back to their home in Ramadi to collect hers. Ikhlas made the tough decision to leave Iraq without her sister, who still remains in Baghdad to this day.

Iklas heard good things about the CRP community center from her neighbors, and decided to start taking English classes. She also attended a women’s leadership training, which encouraged her to join the Hope Workshop. “I like everything about the Hope Workshop,” she says. It has helped her become more professional in communicating with others, she says, and she enjoys interacting with people from different countries and cultures while learning new skills. 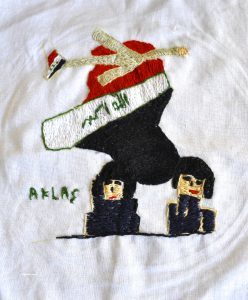 She says before joining the Hope Workshop, she would spend her days, morning through night, alone. “Now, I have nearly no free time,” she says, as she is always busy with a project or activity from the Hope Workshop or from CRP. “I don’t feel lonely anymore,” she says

Ikhlas’ first picture shows a map of Iraq with a plane above it. “I’m on the plane,” she explains, saying goodbye to her family members, including her sister, who she had to leave behind when she came to Jordan alone. 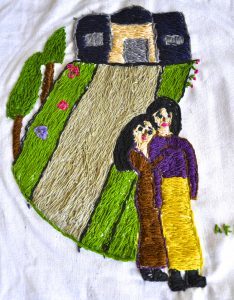 Her second image is of her sister’s house in Ramadi, where she also used to live. In the garden, she has stitched a picture of her and her sister in an embrace, to show the closeness of their relationships and convey the feelings of loss that come with leaving family members behind. “I still talk to my sister everyday,” she says, but it’s not the same as having her here.

“The positivity in my life comes from CRP,” says Ikhlas. She spends her time at the center trying to forget her struggle. She wants to travel far away, she says, so she can feel completely safe.