Starting a new class can be scary for anyone, but especially for refugees. New environments bring feelings of inadequacy or nervousness, as they struggle with past trauma. They can find it hard to believe in themselves or to work with others. But there’s one universal: an uneasy student can feel a lot better because of a great teacher. Such is the case for Haneen, a Syrian refugee who attends computer classes at CRP with her teacher, Mr. Iven.

After hearing about some programs and classes CRP offers, Haneen took interest in our computer class. She joined simply because she kept forgetting daily tasks and wanted to manage her calendar and finances better. (Finances are a constant stressor for refugees). Computers weren’t always Haneen’s forté, though. “I was ignorant. I didn’t even touch a computer before this class,” she says.

Haneen lived a life of peace in Syria until the fighting threatened her family’s safety and the Syrian government incarcerated her older son, Sleman. After fleeing, Amman became her refuge, but even this safety did not calm her fears. She still felt insecure. As a beginner in the computer class, she often worried that Mr. Iven would be upset if she performed tasks slowly or created a mess on the program. The one-hour slot for class seemed like such a short time to learn everything about computers. She felt overwhelmed. These are common symptoms adult refugees who have survived trauma have. New types of fears accompanied the old ones, but Mr. Iven changed her mind.

Over the course of the computer class, Mr. Iven’s patience, encouragement, and simple program illustrations have provided Haneen with new-found confidence. Haneen started from knowing nothing to being able to do everything! Now she can control computer programs for her personal benefit and use. She feels empowered by Mr. Iven’s kindness and curriculum. “He supports me and believes in me, which makes me believe in myself to do it,” she says. 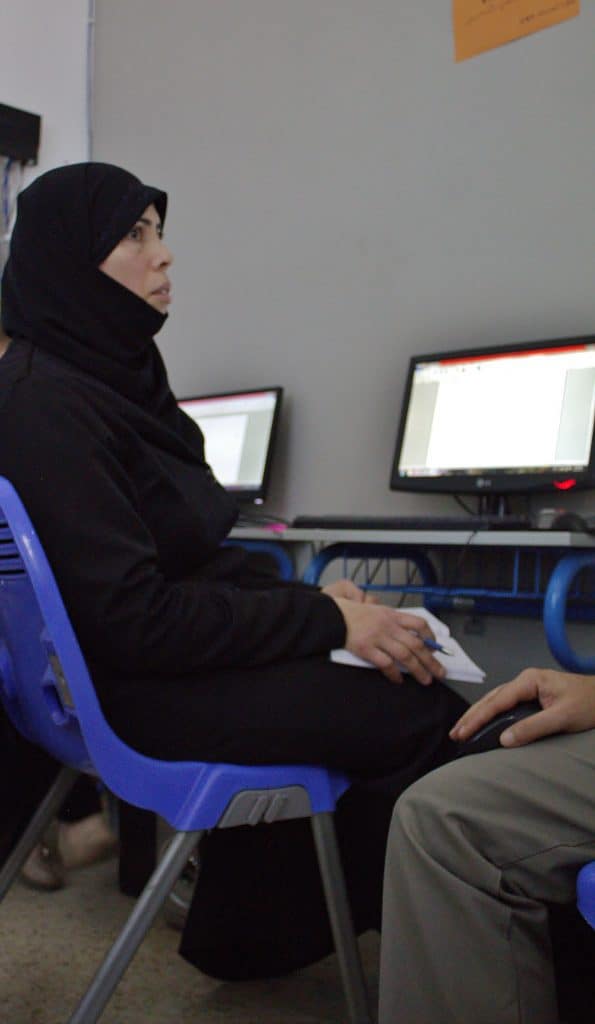 Learning new skills is an important part of the healing process for refugees. Contribute to classes at CRP here.

There are two important effects that Haneen sees from computer class. First, the psychological side, which helps her heal from the past trauma she carried with her from Syria and second, knowing that she, too, can make a difference. She has even paid it forward by teaching her children about computers. She uses her new knowledge to communicate with her son Sleman, now freed and safe in Germany. Everyone at CRP has seen her tremendous growth in confidence and computer skills.

She hopes to give back to her community as she does to her children. Haneen explains that she has gone to other organizations and does not find the same feelings of confidence and courage that exists at CRP. “I’m so lucky because I was accepted and I’m a beginner,” she says as she smiles. Throughout the interview she thanked us many times for giving her a new chance at life.

Haneen is now interested in many subjects and feels she is taking a good step in her life. She says, “If there is a class that I’m interested in, I will do it!” Through the empowerment she experiences in computer class and the skills of self-reliance in other classes, everything has become possible to Haneen. She wants to try everything! Once she was afraid, but now she has courage to continue.

“You know you can do it. You must do it and you will do it by yourself” —Mr. Iven

You can encourage Haneen too! Take a minute to donate to our classes at CRP