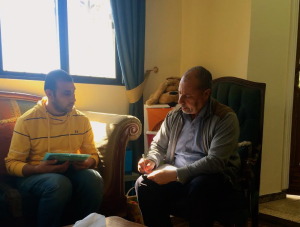 Enormous cuts to the United Nations’ food program for refugees will greatly increase the emergency food assistance CRP will need to provide refugees in the immediate term. The World Food Programme (WFP) recently announced that it has begun to make cuts to its food aid program for Syrian refugees due to an extreme budget shortfall. It is anticipated that these cuts will eliminate around 60% of WFP’s food program in Jordan. While refugees living in refugee camps are not affected, urban refugees—those CRP serves—will be greatly impacted.  An early 2014 WFP study in Jordan highlighted that over 85 percent of Syrian refugee families would have insufficient food supplies without support. These cuts are a significant setback for urban Syrian refugees in Jordan.

Abu Nabeel is a Syrian refugee and CRP beneficiary who volunteers his time at CRP and came to Amman two years ago with his wife and four young children. He and his family recently learned that WFP has cut all of their food assistance. Until recently, they were receiving $135 monthly food vouchers provided by WFP. CRP has just added his family to its food voucher program so that they will not have to worry about whether they will have enough to eat each month.

Abu Nabeel is extremely concerned for his family and the families of his friends who have also lost all of their food vouchers. “These cuts have removed a lot of hope from our lives here in Amman. Imagine how many families and how many children now have no way to buy food and feed themselves. What are they supposed to do? How are they supposed to put food on the table? How will they survive?”

Many families who previously benefited from WFP food voucher support will be affected immensely by these cuts and are in need of CRP’s immediate support. Our top priority is to expand CRP’s food distribution efforts to assist many more families, as many of those affected by the cuts reside in our community. We are expecting an increase in families needing emergency food aid and hope to serve as many people as possible who are dealing with this new and difficult reality.