Who would have thought that something out of a Hollywood movie or teenage nightmare would manifest into a fantastic fundraising initiative? But it was precisely this that our own Rob Hamilton could achieve as he crossed the Atlantic Ocean on a solo row.

The first time Rob saw a rowing boat was in 2008 when he was only 18 years old, but little did he know at that time that he would be rowing solo across the Atlantic a few years later to raise money for one of his favorite charities, Collateral Repair Project (CRP). Having worked at CRP in 2018, Rob says that he saw how much can be done with so little. In his own words, he states that,

It was truly commendable that the money was going to where it was needed most and not to paying staff. The day-to-day work made a difference, and you could see the change you’re actively making in people’s lives.

After being discharged from the army due to a knee injury, Rob knew he had to show the world that no matter what life throws at you, there is always a reason to get back up and survive. And this is what led him to the difficult solo row challenge that made him lose his mind, literally.

Rowing, Rob tells us, was always at the front of his mind even while he attended university. Having studied and worked in the Middle East, Rob developed a love and passion for the region and its people. But he knew that he had to return to Windsor in the UK to train for the row. It was something he had always wanted to do and knew he could not give up.

Preparing for the row took about two years, and Rob kept his spirits up by understanding that this was all worth it and the money would go to helping the needy. So where are the gorillas and zombies, you ask? Read on!

The race began in the Canary Islands, and as I walked up to the boat, it hit me like a bolt of lightning. OMG, am I really going to do this? I could feel my heart jumping out of my chest and tears filling my eyes. But I moved on and forced myself to sit in the boat.

The race, you see, was an unsupported race with no help at all, and everything on board was all that you could have. So, Rob took food rations that would last 85 days and attached a water filter to the boat to filter ocean water and make it drinkable. And so, Rob was off, and there was no looking back now!

My mind kept saying, what are you doing? Have you gone nuts? And it was hard to concentrate with these voices becoming so loud after a few hours of the solo row. There were so many unknowns for a 3000-mile row, and I kept thinking to myself, I have no frame of reference to think back to. How could I survive this?

Do you know how to row a boat? You paddle backward, and as Rob put it ‘the frustrating thing about the start is that because you are facing backward, you keep seeing the Canaries for around 3 or 4 days which is pretty soul-crushing!” But after the first few days, Rob got the hang of things, and it dawned upon him that he was in an ocean as far as the naked eye could see.

To keep my sanity, I started to break the row down into days and hours. It was too daunting to think of a journey that was over 50 days. I would wake up at 4.30 am and be on the oars at 5 am. I learned that the best way to row for me was in increments of 2 hours. So that would mean I would row for 2 hours and dedicate 40 minutes to eat, nap, and recover. I did this until about midnight each day, so essentially, I was paddling 15 hours a day. My target was to reach my destination in less than 60 days, and my journey took 53 days, 3 hours, and 20 minutes. I was very proud of myself and how far one can push their limits.

So where are the gorillas, you ask? Hallucinations started for Rob between days 5 – 10. Rob believes it was the combination of heat, exhaustion, and night rowing that may have triggered this.

I saw three human figures at one stage and asked them for directions. Thinking back, this was creepy, and I am glad that I could move on from that, but the hallucinations did not stop there. I saw zombie hands coming out of the water, a cow standing in the ocean, and a gorilla on top of the boat who offered advice. At that moment, I believed this was a bad sign or omen. Looking back, I must have been losing my mind!

And just like that, Rob reached the finish line. Well, it is easier said than done, I am sure, and his weight loss of 16 kgs during the trip attests to this fact, too. Finally, Rob arrived at his parents and brother awaiting, and it was “surreal’, as he puts it.

To see land and color was something we all take for granted. Yet, for over 50 days, all I could see was blue–the ocean and sky. I think the row brought me closer to the real refugee crisis. The most significant comparison was that there were so many unknowns, and you do not know what is next. But an important difference is that this was a choice for me. I got into the water of my own free will, and refugees do not have this choice. 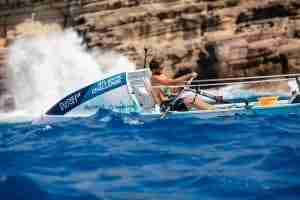 Rob raised $9000 USD for refugees and is thinking of his next adventure. He says, “I am considering a solo row from California to Sydney, or even driving a tuk-tuk across India.” But what he is sure about is that the memories he made with CRP will live on with him, and he is proud to be an ambassador to their cause.

To read more about Rob’s journey, check out his Instagram page here, and if you would like to be part of keeping vulnerable families resilient, you can donate here. And for the dare devils out there, let us know if you would like to create an adventure of your own and help support refugees at the same time.