At CRP, we aim to bring the diversity of children found in refugee communities together. We give the kids various activities and organized events that will teach them to love and respect each other, themselves, their families, and the people that surround them. Regardless of their nationalities, their age, or religion, these activities and events generate bonds between refugee children that cannot be created anywhere else. Nobody feels left out at CRP. We work towards inclusivity, building their confidence, and constructing convivial relationships between children of different backgrounds to prevent bullying or isolation.

Nesreen is a young refugee who fled Iraq with her parents after the fall of Mosul to Daesh (also known as ISIS) in 2014. By coming to CRP’s After-School Club, she met Majeda and Ameera, both from Homs in Syria. Majeda and Ameera were only babies when they arrived in Amman, respectively 6 and 7 years ago, and therefore have no memory of their hometown. Studies show that babies can undergo some of most negative effects during displacement, even more than kids or adults. At CRP, staff and volunteers work to include activities that help kids work through these traumas.

Since Nesreen, Majeda, and Ameera have met, these three have formed a special bond. Although Mejeda and Ameera go to school, Nesreen experienced more difficulties in adapting to her situation.

It’s common for Syrian refugee children have greater access to Jordanian schools. The situation gets worse for other nationalities. A majority of Iraqi refugee children, as well as Somalis and Sudanese, do not have opportunities to establish strong relationships with Jordanian or Syrian children at school. Most of the time, they end up staying within their communities’ confines.

“Before coming to CRP I didn’t know anybody, I don’t go to school in Amman . . . but here I have a lot of friends,” Nesreen says. She came to CRP for the first time a month ago, while Majeda and Ameera had already met two months before. They now form a strong triangle of friends. When we asked them what activity they preferred at CRP, they all answered at the same time: “Everything!”

During the after-school club, Nesreen also discovered that Majeda lived in her same apartment building, which allowed them to leave the After-School Club and spend time together outside of CRP. Majeda and Ameera also go to the same school, so this friendship triangle now gets to play together very often.

Thanks to CRP, refugee children in Amman have an opportunity to discover what friendship means, how important it is, while learning to engage with other children from many different backgrounds.

Help build strong friendships across religion and nationalities. Help children cope with the trauma of displacement. Donate to CRP today. 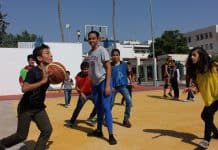