Jenan was a normal sixth-grade girl in Syria. She had friends and went to school. One day while in the garden, alone, Jenan’s home was hit by a bomb. She passed out because of the many broken bones in her face and body.

Her father, Abu Qais, found Jenan and rushed her to the hospital. The army came. They knew Jenan was alive and that’s when shots were fired. Jenan and her family were led out a back door and advised to leave Syria. They were no longer allowed to receive medical treatment from this hospital. 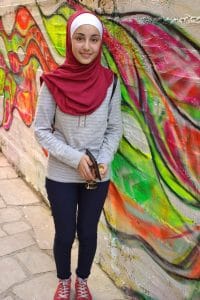 In search of safety and assistance, Abu Qais carried Jenan all the way to the Jordanian border, since they no longer had a car. “For a few days, dogs followed the scent of my blood as we traveled,” Jenan says. “My mother began to lose hope that I would never wake up, but baba (Abu Qais) had hope that I would live. He refused to leave me behind as we approached the Jordanian border.”

Making it across the border was a difficult task. There are two ways to enter into Jordan from Syria. One way takes refugees to the Za’atari camp, which hosts the injured and is home to more than 100,000 refugees according to the UNHCR. The other way is a longer road on which many Syrian refugees enter Jordan. Abu Qais was extremely tired from fleeing and carrying Jenan. He decided the shorter way was the best option for their circumstances.

In and out of consciousness, Jenan heard everything that was happening. Abu Qais pleaded with the man to let him into Jordan. “If there is hope for Jenan, I want to do this. She’s alive. Please believe me. I want to help her.” His plea was met with hope and they were directed to the Za’atari camp.

The first camp hospital they came to was not developed enough to care for Jenan. Camp doctors refused to transfer her to another hospital with better medical care so the family sought another solution. Jenan’s family met a Jordanian who helps Syrian refugees. “When he sat with my mom, he told her that I was too young and that I could be alive,” says Jenan.

An agreement was made to transfer her to a private hospital outside the camp. After admittance, she was passed from room to room. Several days later, doctors brought bad news as Jenan was beginning to feel strength. Treatment would end due to lack of additional funding. Abu Qais insisted on continuing the medical care but was met with refusal.

Jenan left the hospital feeling weak. The fluids and medicines were the only things helping heal her broken bones. Someone offered help, but he never donated any money. At last, hope was regained. Abu Qais’ friend offered to pay the remaining amount to continue treatment. They admitted Jenan to a different hospital and she stayed there until she recovered.

Though Jenan’s story is full of sorrow, her future is full of hope. Now at sixteen and a half, Jenan has settled into school and found people who care for her in Amman. Of course she goes through typical struggles of teens as she attends school—boys, school work, future dreams. We ask what makes Jenan happy she responds, “I want to be a fashion designer. I love to draw and I discovered that I was really good at drawing dresses and clothing. There are not many opportunities here in Jordan,” she says. “But if we go to the UK, I want to meet someone that could support me being a fashion designer.”

Jenan volunteers along side her father, Abu Qais at CRP. She has participated in various distributions, the most recent being the back to school distribution of school supplies and backpacks for about 1,000 children and teens. “I needed help and I found people who cared about me and supported me at CRP so I want to give back to them.”

Many others have similar stories, like Jenan’s, about the horrors of war and fleeing their countries. Jenan wants you, the reader, to know, “Thank you so much for listening to me. Not all people can hear this story. Maybe you will think it is a miracle or something unbelievable or that this couldn’t have happened. I have talked with my friends about what has happened in the past and they don’t believe me.”

Jenan found safety, community, and hope at CRP. You can help give all of that to Jenan and other refugees teens with your donation. It only take three minutes to show your support.