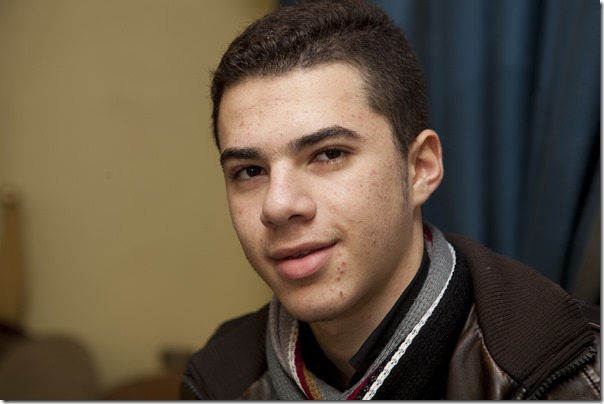 Ala’ is an energetic and personable 17 year-old from Iraq who listens to an eclectic mix of traditional Arabic music and Metallica. He’s a cool kid who likes to dress sharp, play the guitar and go out with friends. When asked where he likes to go, he’ll respond in typical elusive teenage fashion — "just out."

But Ala’ is also sensitive, self-aware and a talented artist, though he’ll brush off his skill, modestly explaining that he just draws "characters and flowers." When provoked a bit, he pulls out his phone to show me well done, sophisticated drawings of faces and a beautiful sketch of a women. He swipes to the next photo on his phone and, blushing, says, "and — of course — Angelina Jolie."

But Ala’ hasn’t drawn much since arriving in Jordan. He’s completed just one drawing, he says, "for the children," meaning his brothers. This is just one of many changes he’s experienced since arriving in Amman, where he lives with his mother and brothers.

Although Ala’s family has experienced a lot of hardship since being forced to leave Iraq, he remains positive. He wants to resettle in Sweden where his father lives and to continue his studies. His dream is to become a computer scientist and to study engineering.

In the meantime, Ala’a is very much in his element sitting arm in arm with his friends in CRP’s Dream Group, supporting (and occasionally heckling) one another. His two best friends are also in CRP’s Dream Group, but when asked who his friends are, he’ll tell you everyone in the group. He says he likes to talk about and improve his self confidence and public speaking with the Dream Group. But the way he carries himself one would doubt he has a need at all to improve in any of these areas.

To help CRP help Ala’ and other people like him, please consider giving a small monthly donation.