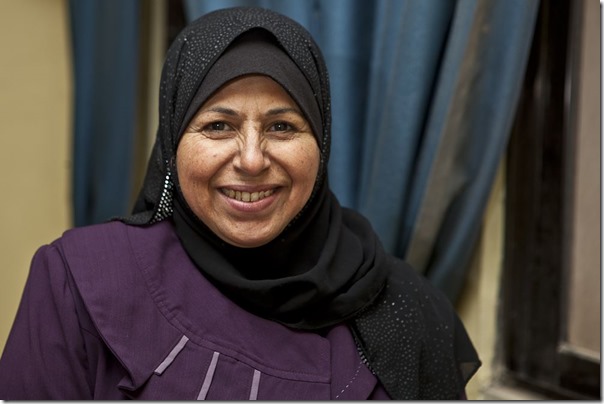 Salam takes off her bright orange glasses to pose for the above photo, but while interviewed she wears them in a funny way over her hijab. She chuckles at her unique fashion statement and is generally in good spirits, scrunching her nose as she laughs.

Salam’s favorite thing about Amman is "security," an almost ubiquitous answer among CRP’s refugee community. She says she has become accustomed to living in Jordan after being here for almost 2 years. While she was recently offered resettlement in the US, she refused it because she felt she didn’t have the connections in the US or the money to support her two daughters. Salam worked as a dressmaker in Iraq, but she is now divorced and would have to support her two daughters by herself.

Salam’s family benefits from CRP’s food voucher program. She explains that at the beginning of every month, she buys rice, oil, milk and sugar, emphasizing the rice, because, as she explains, "Iraqis always like rice more than bread." As a family, Salam and her daughters are very involved at the center. Her daughters have taken karate and English classes at the center, and seeing that English classes have started up again Salam she excitedly mentions her plan to join them.

To help CRP help Salam and other people like her, please consider giving a small monthly donation.