Ravaged by the Civil War that broke out in 2014, Yemen is facing one of the most severe humanitarian crises of our time.The suffering has been unprecedented; an estimated 377,000 Yemenis have died due to the conflict and resulting food and medicine shortages. Unsure where else to turn and desperate to reach safety, Yemenis have sought refuge in a variety of nearby countries, of which Jordan is one.

Recently we spoke with Nawal, who is one of an estimated 13,727 Yemeni refugees currently living in Jordan. She shared with us her exhaustion, her hopelessness and her apprehension for the future. What follows is her story.

“I’m not exaggerating about our life, we thank God for everything in any case, but we are so tired”

Nawal, who came to Jordan with hopes of a better life and in search of adequate medical care for her grandson, was instead met with financial insecurity and constant worry. As is the case with most Yemeni refugees in Jordan, she is not legally allowed to work in the majority of sectors, leaving her without any means of gaining independence or earning even a modest income. Severely impoverished, she is forced to rely on charitable aid in order to survive; a poor option seeing as the majority of funding for most larger not-for-profit organizations in Jordan is directed towards the much larger Syrian and Iraqi refugee communities.

“We aren’t the only ones, many Yemenis are stuck here just like us”

Nawal traveled to Jordan with her daughter and her young grandson, who suffers from severe health issues. They were following her son, who had entered the country shortly before. Similarly to many refugees in her community, she initially entered Jordan on a medical visa, which has since expired. Now, she finds herself unable to register for asylum and resettlement with the UNHCR, since the organization stopped processing requests for refugee status from Yemenis who entered Jordan after 2019. Afraid to go back to Yemen, where the conflict is ongoing and members of her family have received threats, she feels she has no way forward.

“He was granted refugee status, as he requested asylum, but they didn’t add me to his file”

Nawal tells us that she, like many Yemenis in Jordan, has experienced family separation. Her son is one of a tiny minority of Yemeni refugees who managed to receive an asylum approval through the UNHCR, having applied before 2019.

Family separation can be a traumatizing experience for refugees of all nationalities. Despite the obvious joy of seeing a loved one resettled in a third country, where they can benefit from increased economic opportunity, the sense of loss can also be acute. Nawal has no idea when, if ever, she will be able to see her son again. She wonders how she will survive now that he isn’t around to help her pay the bills, and seeing him resettled makes her realize that she herself has been left behind. 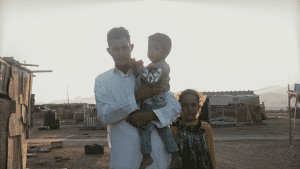 “CRP is the only organization that we always came to, even before Corona. It connected us to aid and school supplies”

Funding in large not-for-profit organizations is targeted mainly at larger refugee groups within Jordan, such as Iraqis and Syrians, meaning that the Yemeni community is often underserved in terms of aid and assistance. This can make it difficult for Yemeni refugees to access the support and services which they need. Nawal tells us that CRP is the only place in Amman where she has been able to seek the support which she relies on.

Before connecting vulnerable individuals to psychosocial support or educational programming, CRP’s first priority is to ensure our community members are safe, secure and capable of combating key issues such as rent and food insecurity.

Our emergency assistance program aims to provide this kind of support. For families like Nawal’s who are struggling to make ends meet from one day to the next, this service is crucial.

CRP seeks to meet the needs of our most vulnerable communities, however, as an organization we want to be doing more for people like Nawal. You can make a difference in the lives of Nawal and others like her by supporting CRP. Through you CRP’s Yemeni community will be reminded that they are not forgotten and have access to the resources they need.