Three years ago, CRP began offering professional crash courses in the barber trade. Each course meets over a period of two months. We schedule courses Saturday through Thursday to accommodate the varying schedules of our students. Each group of students meet twice a week for three hours. Despite an exhaustive waiting list, we cap classes at 15 students, fostering a personalized environment.

Subsequently, the barbershop is integral to both cultivating skills and creating a sense of community between the students and their instructors. We have given a former barber from Iraq, Sa’eed, an opportunity to share his skills with fellow refugees in the hopes that they can use these newfound skills to impart self-confidence, find employment, and, ultimately establish their own barbershop.

Sa’eed has been a barber for 43 years. Despite his plethora of experience, he has faced discrimination in his quest for employment due to his age. “I joined and have remained a teacher at CRP because they gave me an opportunity when no one would. For that reason, I would never leave,” Sa’eed says. “Despite the age gap between my students and I, the fundamentals remain the same. It feels great to share what I have learned throughout the years, and I love teaching the fundamentals to being a great barber. I have many students who have graduated and gone on to become great barbers, which I am very proud of.”

Because refugees are largely not allowed to work in Jordan, learning skills that they can barter or use in informal employment settings is important. Amer, a recent graduate of Sa’eed’s workshop, is currently seeking work as a barber. Amer is very thankful to both his teacher, Saeed, and CRP as the course taught him a variety of skills that are significant both within the barbershop and in life.

“The first thing we learned was self confidence. Because being a barber was new to us all, we were first trained in the fundamentals. This entailed learning how to carry the scissors, how to hold the clippers, and how to cut with a razor. Being self confident is important because only with a strong foundation in the basics could I then begin to improvise.” says Amer.

Amer frequently visits his old classroom to convene with old friends and meet new ones. 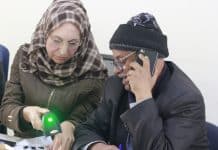 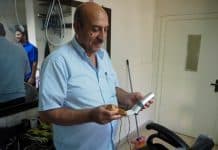