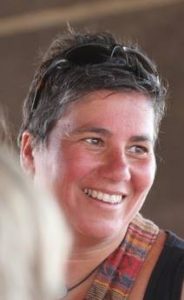 I first heard of CRP from a couple of friends who were volunteering there. I liked its mission and the echoes I heard of how it was involved with the refugee community, so I looked it up online. At the time I wasn’t living in Jordan anymore, but I had seen first hand the hurdles urban refugees were facing, and wanted to continue to contribute in some way. Initially, I had decided to just make a donation, but then discovered on the site that I could become a monthly donor instead. I thought it was a better approach because, through this method, CRP could expect a regular amount, making it easier to plan for their recurring costs, and the refugees’ monthly needs.
I moved back to Amman a few months ago, and after spending some time at the center, I really felt like my donation was being well put to use. In addition to responding to the refugees’ emergency needs, CRP is also providing social and community services. I feel like the language courses and personal development classes they are offering are key in allowing these displaced populations to regain their dignity, and find a place that encourages them to learn, communicate and grow. I am happy there are organizations like CRP who are there to respond to a refugee population who, unfortunately, seems to be forgotten by the media and by aid agencies.
Become a Partner in Repair today!