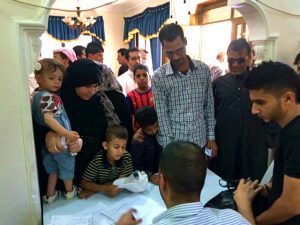 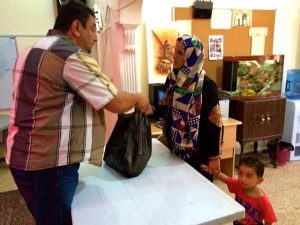 CRP kicked off October and the holiday season with six straight days of food giveaways. A total of 802 families made up of 3,145 people received food stuff from us during this time! 861 bags of rice, which were donated by the American Community School, as well as 181 kg of fresh meat were given out, in addition to our regular monthly food vouchers. CRP staff was working day and night to distribute the items to lines of people that ran all the way down the street! All of the distribution days combined made up CRP’s largest distribution since 2008.

The distributions started on Wednesday October 1, when rice was given out to 608 families. The very next day CRP gave out its regular food vouchers, reaching 24 households. On October 3, CRP gave out extra food vouchers to 42 families, worth $1,500 in total. The following day marked the first day of Eid. To celebrate, CRP gave out 80 kg of fresh sheep meat to 76 families. On the second day of Eid, more meat was given out in the morning, and afterward we held a special outing for families with children. Refugee families gathered for an afternoon at a local wildlife park, where everyone participated in face painting, played games like football and tag, looked at animals, and ran and played at the playground. CRP distributed juice boxes and chocolate for the kids, and gave them gifts like yo-yos at the end of the day. The distributions wrapped up the following day on October 6 with more fresh meat and rice for 29 families. CRP employee Ghazwan said he was happy CRP was able to impact so many people with the distributions.

“It was a good success,” Ghazwan said. “I was really happy because the people we were helping were really happy. We are making them feel that there are still people who care about refugees. Just to secure them with food, at least, this is really important. Food security is always the number one priority.”

We want to give special thanks to all of our many supporters from around the globe who make these emergency assistance efforts possible. And a very special thanks to The American Community School of Amman, Niran Samaraie, and Reeba Kausar!