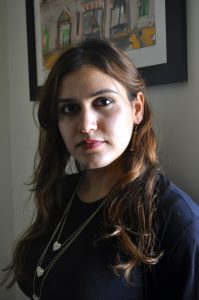 The Hope Workshop at Collateral Repair Project (CRP) is a women’s craft cooperative that brings refugee women together to design and market hand-made crafts in local bazaars throughout Amman. Most of the women are refugees from Iraq and Syria and their embroidery often weave together their old and new experiences. Over the summer, we collaborated with the Advocacy Project to have the women create beautiful embroidered squares that depict their lives, which were then put together to produce quilts for sale and exhibition in the United States. Below Sara, a member from our summer cooperative, shares her story.

Sara came from Baghdad to Jordan with her father, mother, and two sisters in May of 2013. Her mother, Dhamya, had already been attending Hope Workshop meetings and when Sara heard about the embroidery project, she decided to join in. “I didn’t know how to do embroidery,” she says, “but I knew I could learn.”

Sara says that she has always been very shy and guarded, but has gained confidence working on this project. “I became a leader. And now I can help other women in the group become leaders,” she says.

Sara’s embroidery squares stood out for being both very literal and abstract. Her first square is a picture of her thinking about her engineering tools. She was studying engineering in Iraq when her family made the decision to leave, and had to leave her education behind. She thinks about this missed opportunity a lot, she says, since in Jordan she is unable to pursue a university education. Currently, she and her family are waiting to be resettled in Australia, and she carries the hope that if they’re re-settled, she will be able to complete her engineering studies there.

Her second picture shows the figure of a woman with several other figures surrounding her. Sara says women constantly feel the eyes of others on them. The figures surrounding the women represent society, culture, and religion, and the different types of pressure these institutions exert over women’s lives. She says often women aren’t permitted to express their true feelings and thoughts due to this pressure, and she wanted to highlight this struggle, which is particularly acute for refugees in a new country and culture, through this image. 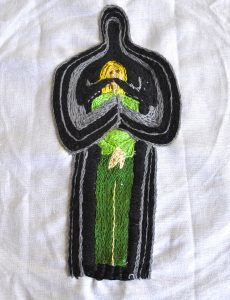 In addition to learning embroidery she’s already learned, Sara hopes to master crochet, and get more involved at the CRP community center by attending women’s empowerment training. She says she has more hope for the future and can see herself accomplishing many things. This confidence comes from inside, and she is happy to have found an environment in the Hope Workshop where she can continue to strengthen her confidence and learn new skills.

Over the next few weeks, we will be featuring other women who were a part of the summer workshop. This month, CRP restarted the Hope Workshop. New and old members will meet together and create more beautiful embroidery products that they will be able to sell in local markets and generate a small income. We cannot wait to see the amazing work they create!