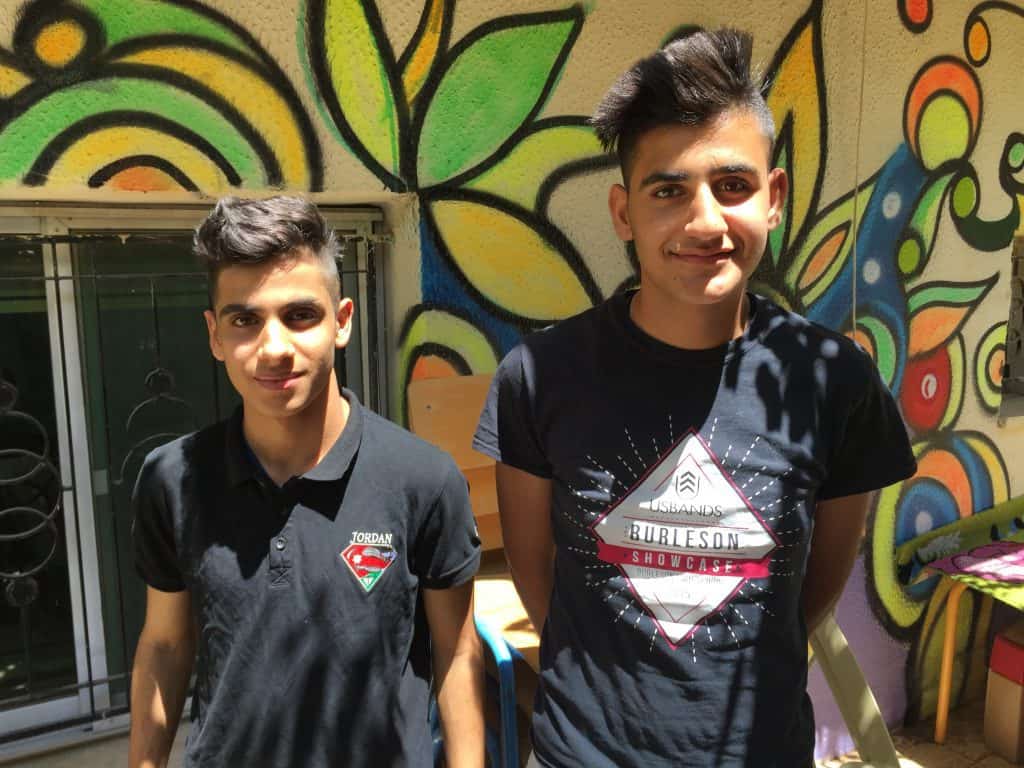 Back in Baghdad, Fareed loved skateboarding. He and his friends spent hours at the skatepark, where they worked on their skills and spent time together. Bassem, meanwhile, had never skated before. But when he got the chance to learn skateboarding with CRP, he immediately signed up. Fareed and Bassem, now friends, met through CRP’s skatepark program.

On some weekends, CRP brings teenagers to Amman’s 7Hills skatepark. Everyone is welcome, from experienced skateboarders to complete beginners. CRP provides protective pads and helmets, plus instruction from experts. The program, one of the most popular ones at CRP, holds significant meaning for many of its participants.

Refugee teenagers have a particularly difficult time adjusting to Amman. Many do not attend school. Some of them missed years of schooling due to conflict in their home countries, leaving them too far behind to reenter formal education in Jordan. Those who do attend school face overcrowded classrooms of 45 or more students, and many struggle with financial worries or trauma-related mental health concerns. These factors combine to push refugee teens out of school. As a result, many of Amman’s teenage refugees have little to occupy their time, leaving them bored and frustrated.

CRP hosts an informal Saturday teen group, where teens can socialize in safe environment. Because refugee teens lack pocket money, and there are few parks or other free spaces in Amman, refugee teens often don’t have any place where they can just simply hang out. CRP’s Teen Group also offers weekend activities, including field trips, soccer matches, and trips to the skatepark.

That’s why CRP’s field trips to the skatepark are so popular. Many participants discover a passion for skateboarding. It gives them an activity to look forward to, what participant Bassem called something to “entertain yourself with if you were bored.”

Beyond that, the skatepark is one place where Amman’s diverse communities come together. Iraqis and Syrians, men and women, Jordanians and refugees can temporarily overlook their differences and share in a common experience. When asked about his experience with the skatepark, Bassem mentioned how he “learned skateboarding after going to the skatepark with CRP.” But, he quickly added, “I got to know a lot of new people along the way.”

For teenage refugees feeling trapped by boredom, the skatepark program offers a welcome release. Fareed, a more experienced skateboarder, remarked how he and his friends “played, jumped, and fell” in the skatepark, temporarily forgetting their difficulties. Though Bassem had never skateboarded before, he quickly discovered a passion for the sport. He mentioned how much he enjoyed skateboarding, describing how he was hardly “able to wait for the weekend to come so [he could] go to the skatepark.”

Fareed also saw the skatepark program as a leadership opportunity. He remembers how “we would go, watch people who are better at skateboarding than us, then imitate them. You gain experience when you practice a lot, and perhaps you will become a skateboarding instructor.”

Unfortunately, CRP is unable to take teenage refugees to the skatepark as often as we would like. Transportation is expensive, as is protective gear and instruction. Adnan, a volunteer staff member at CRP, recalled answering eager participants who asked to visit the skatepark. “All the time they ask me about skating, and I say ‘after Eid.’” But now Eid has come and gone, and CRP still struggles to fund trips to the skatepark.