The Syrian Civil War: Origin of a Protracted Displacement Crisis

Syria’s Civil War, which began in 2011 and continues until this day, traces its origins to the Arab Spring protests. These were a series of popular revolts which spread throughout the MENA region in the early 2010s, as citizens expressed their discontent with issues ranging from corruption and economic mismanagement to a lack of democratic freedoms.

In Syria, protests were initially peaceful. However, a strict government crackdown, which included the use of deadly force, soon followed. In response, the Syrian people began to protest on a larger scale, violence became widespread, and the country quickly devolved into a state of Civil War.

The crisis is now in its 11th year. The war is now being fought between a variety of factions, among them terrorist groups such as the Islamic State. International involvement has also complicated matters, with major economic powers such as Russia, Iran, and several Western states funneling support to different players in the conflict. Due in large part to these complications, a resolution to the fighting seems unlikely to come in the near future.

One of the major factors harming Syrian refugees in Jordan is a lack of access to employment. Although Syrians are able to apply for and be granted work permits under the Jordan Compact, the number of sectors they are eligible for work in is still limited and the number of permits issued so far is insufficient when compared to the size of the Syrian community. Degrees and qualifications from Syria are not always seen as valid by Jordanian employers, forcing many to accept jobs far below their experience level and skill set. As a result, Syrians tend to fill positions undesirable to Jordanians. When working without a permit in particular they may find themselves at risk of exploitation, with many working in unsafe conditions or having their wages withheld.

These employment challenges frequently translate into economic insecurity. Families are often at risk of expulsion from their places of residence due to an inability to pay rent, and struggle to afford basic necessities such as food, water and transportation. 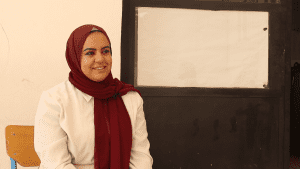 Access to education is also a challenge for Syrian families in Jordan. Under Jordanian law, a child who has missed over 3 consecutive years of schooling is ineligible to register in public school. This is a barrier to success for many Syrian children, who have had their education disrupted by war, displacement and long stays in refugee camps. Dropout rates among Syrian children are also high, as families employ negative coping strategies such as child labour and marriage in response to financial instability.

At CRP, we strive to create a welcoming atmosphere in which refugees of all nationalities feel comfortable. To this end, all of our staff members are briefed on trauma sensitivity, meaning that they learn healthy modes of interacting with refugees which take into consideration the emotional impact of war and displacement. Our programming places a great emphasis on integration and social cohesion, which we see as crucial to refugee families’ integration into their new country.

Additionally, our emergency assistance program empowers refugee families to be able to meet their basic needs. When families are able to afford rent and essential food items, it gives them the time to rest, recover from their past experiences and look forward to a brighter future.