“I didn’t know any single Syrian before coming to CRP,” says Hanadi. The Iraqi woman arrived in Amman ten months ago with her husband. After putting her name on the waiting list for the beauty classes soon after she learned about CRP’s Family Resource and Community Center, she joined the program in October this year. Here she met Suhair from Syria. The women are both living in CRP’s neighborhood Hashemi Shamali, but Suhair says that “here is the only space where I meet and interact with Iraqis.”

Although Hashemi Shamali is a heterogeneous neighborhood in East Amman where refugees from different sects and nationalities live, families often stay with people from their own religion or country of origin. Widespread experiences of discrimination and persecution due to their identity prior to arriving in Amman make people reluctant to engage with strangers. CRP provides a space for them to meet, get to know each other, and overcome prejudices.

During the classes, the women say, everyone is concentrated on the things that they learn. Afterward, however, they have time to chat with the other women. “We talk about weddings, about our families, or about food we cook,” they say. Part of these discussions is learning about each other’s traditions, and of common and different aspects of each other’s culture. Westerners might assume that people from neighboring countries in the Middle East are the same, but the differences are just as significant as, say, someone from France and Germany. What is more, some people from within the same country might practice different religions or speak different languages.

One of the first things both women say they recognized is their different accents. While Arabic is the main language in Jordan, Syria, and Iraq, dialects in the region are very diverse. Similar is their cuisine. “Our food is very similar, but we have differences in how we prepare it. Iraqi food is often more heavy, they use more meat,” explains Suhair. “And we have different names for the same dish. For example, what we call dolma is called yalanci in Syria,” adds Hanadi, referring to the stuffed vegetables and grape leaves that is a famous dish in the across the Middle East and Mediterranean. Another example are wedding ceremonies. “I was surprised to hear that in some weddings women and men mingle during the celebration. In our weddings, we stay in separated places,” says Suhair.

But learning about each other doesn’t stop at linguistic and cultural particularities. “I like to see how members of the Iraqi community are supporting each other here in the neighborhood. I think this is something we can learn from,” says Suhair.

CRP aims to increase interaction between members of different refugee and host communities in Amman. The center and its activities provide the spaces needed for these interaction. Your donation can help sustain this room for activities fostering solidarity and mutual support among refugees in Amman. Donate here. 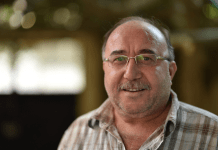